I recently blogged an open letter to Twitter after they informed me that my Twitter account @GSpellchecker would be ‘permanently suspended’.  This produced a flurry of interest and support on a scale far greater than I had anticipated nor experienced for anything else I’ve been involved with before. It seems my fellow Twitter compadres have a potent dislike for injustice.

Although the email (pictured above) is generic and unrevealing, it is the desired and correct decision from Twitter.  Below is my brief reply to it:

Thank you for your prompt and positive response.

I would please urge you to review and investigate the individual, or individuals responsible for these bogus reports – and review any other suspensions they’ve caused as I’m aware I’m not their only victim.

It does appear to confirm my suspicions however – individuals (or an individual) are making bogus reports of ‘abuse or harassment’ to silence criticism, or people they simply do not like.  This is clear given the ‘review’ carried out by Twitter deemed the initial reports against me were not substantive enough to warrant the suspension or banning.

It’s amusing to note just how much this attempt to shut me down has backfired; indeed as a result, my blog visits have hit record numbers and downloads of my podcast have spiked.  Not to mention my Twitter ‘followers’ have now crossed a 50,000 milestone.  I’ve also had media enquiries and received my first new Patreon supporter in weeks.  So, I suppose this is a thank you to those responsible for my suspension too.

As before, I will continue to use my voice to critique bad ideas and their ideologues, with civility – but without abuse or dilution.

I will always oppose abuse and harassment in all its forms, but it’s equally important that those who wish to stifle legitimate criticism, satire and dissent via disingenuous tactics be exposed and held to account for their behaviour also.  I hope Twitter takes a good look at the responsible parties in this instance and revokes the privileges that allow them to influence automatic suspensions and bans.

I want to say a HUGE thank you to those of you who’ve shared my open letter, contacted Twitter on my behalf and sent messages of support my way.  For the first time since joining Twitter I’ve actually been unable to cope with the sheer volume of tweets coming my way, so I apologise if I’ve not replied to your well-wishes, but please know it’s appreciated and has not gone unnoticed.  It’s overwhelming, thank you.

You can listen to The Godless Spellchecker Podcast here, and support it by becoming a patron here.

Quinn Norton Implodes – In The Interest Of Clarity

After the recent confusion caused by a statement heard on BBC Newsnight that “Men are raised to hate women” I decided to ask the journalist responsible for an explanation.

The outcome was unexpected and inspired me to pen this blog post, which in turn led to in my view, unfairly, hours of bizarre accusations from a tiny number of individuals 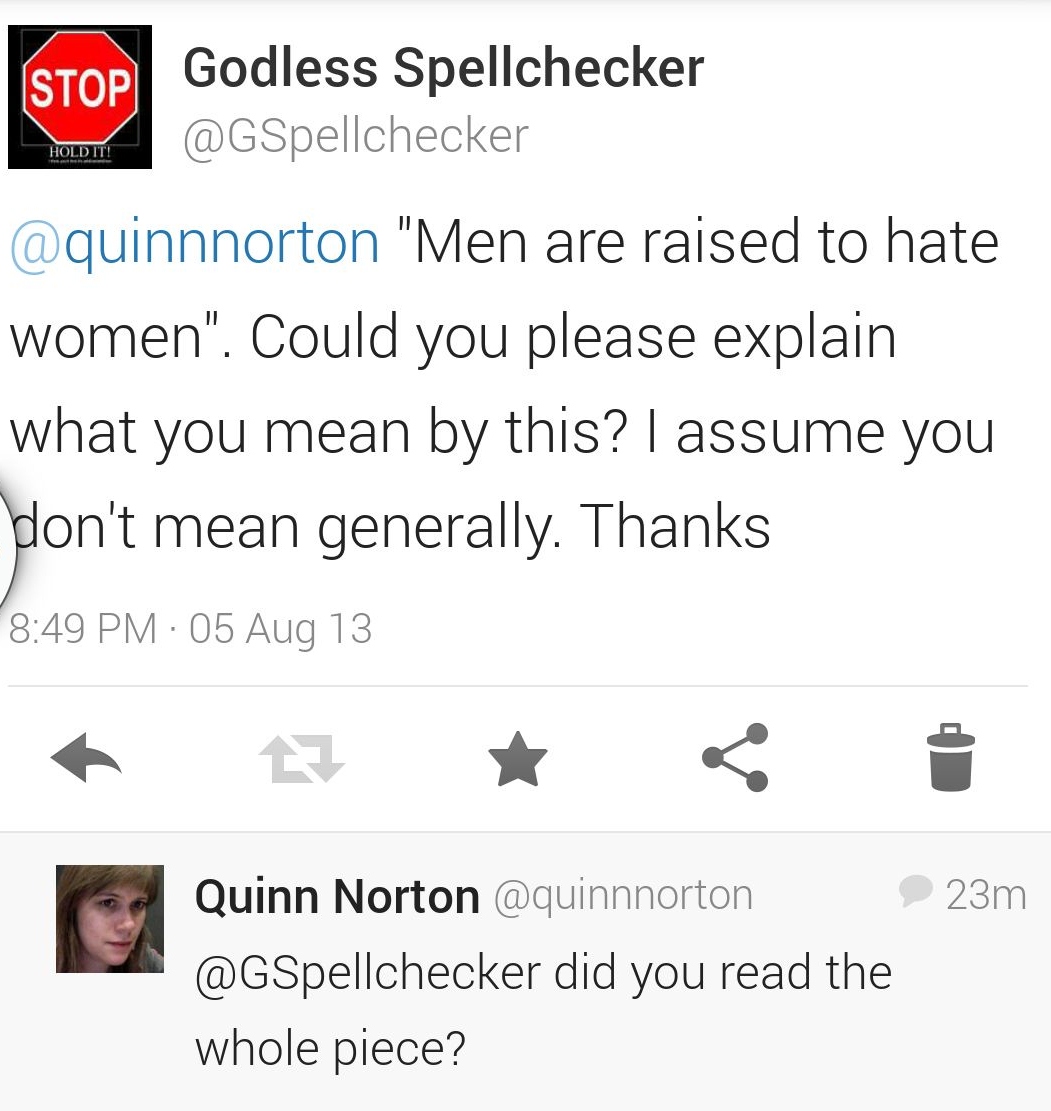 Although the overwhelming majority of (I realise this is not indicative of being right) people seemed to agree that clarification was necessary, and the initial statement was too much of a generalisation to be helpful to say the least, the very small number who did take issue with me seemed to fall in to two camps.

Some argued that the statement was perfectly reasonable and not deserving of question.  And that it was actually my lack of understanding that was the real problem, or the manner in which I questioned.

Others seemingly fell afoul of a catastrophic inability to differentiate between the following two statements, (one genuine, one imagined):

“What exactly do you mean by that?  Please explain”

“Sexism and misogyny are not genuine problems in society”.

I could not attempt a defence of the second statement, even if I were stupid enough to actually believe it, or want to.

Obviously there are a lot of good people who feel incredibly passionate about sexism and misogyny for incredibly valid reasons (captain obvious) and may have felt I was somehow denying the importance or existence of these issues.  As explainable as this perception may be on some level, it is not even remotely accurate to anything I have said, implied or argued.